After running our Chain of Command game at Fall-In last November, Jenny and I kicked around some ideas for how we could improve the game without straying too far from the historical situation.

In the initial version, the fight was a meeting engagement between New Zealand troops advancing due south towards the bridge over the canal and Fallschirmjagers advancing from both the east and west attempting to seize the bridge. Even though the Fallschirmjagers had 5 command dice instead of 6, troop quality differences made a huge difference and a variety of balancing mechanisms were put in place (VP penalties based on timing, off board Bofors firing at the Fallschirmjagers, the possibility of the bridge blowing up) to improve the quality of the game. It just seemed too much, so I went in search of a better answer. 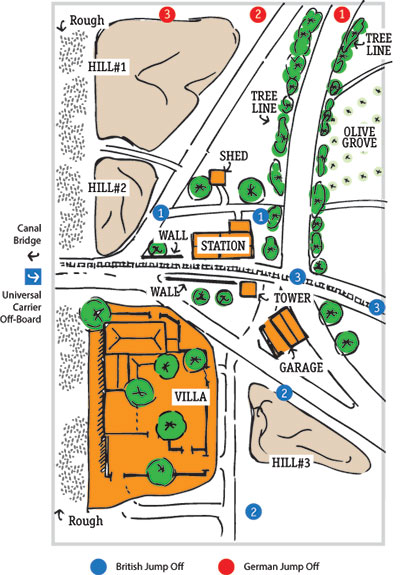 In this version, the troop mix is similar to the initial version but two of the commonwealth platoons are assumed to be the Australians who were dug in on either side of the bridge with a single platoon of New Zealand troops moving to reinforce them, while the Fallschirmjagers all enter from the west edge of the board. In the initial version, the Australians were assumed to have delayed the Fallschirmjagers but then broken as the New Zealand troops arrived. Giving the Commonwealth player the benefit of entrenchments, even if only one platoon could really benefit from it, makes a huge difference in how the game plays, and allows for many of the complicated balancing mechanisms to be dropped. The one that I did end up keeping as an incentive for the Fallschirmjagers to move quickly was to drop the force morale of each FJ platoon 1 point every other phase. Since I started each platoon out at Force Morale 11, the pressure was mostly psychological, but it does seem to be effective.

The game was well received at Historicon, with 6 players signing up, 5 actually showing up and 1 player who showed up just in case I could fit him in. All the players had played Chain of Command previously, even if they may have been a bit rusty in some cases, which helped the game run smoother. I’ve noticed an increase in experience with the rules each time I’ve run a Chain of Command game at a convention, so it seems the rules are getting played and are slowly creeping into the collective consciousness of gamers in the US.

The scenario seemed to work well, with all of the players saying the enjoyed it and the Commonwealth pulling out a narrow victory. The player packs that Jenny designed were also a hit, so for those that want to take a look: Corinth_Scenario_Pack_2