Now that we have a specific encounter and location I have to figure out how it translates into a board for our game.

I will be gathering every photo I can find from the past and now, and stuffing them into folders. I grab everything. Maybe later I’ll want to know what color the dirt is or what the bark looks like on trees typical of the area. What kinds of trees are there? How do folks arrange things around the house/barn/village? What do houses look like in the specific area I’m interested in? How wide are the roads? Are roads paved? With what? So yeah, I gather lots of stuff. I’ve also gotten pretty good at using Google translate to search in an area’s native language…when I can. And the results will be different than searching in English only…oh yes they will. Once I have a specific location to base the game in, I spend A LOT of time staring at satellite photos…zooming in…zooming out…and then walking thru street views. At first I’m just trying to decide where things really happened. A lot will have changed over 70+ years and I start by trying to connect what I know about the past with what I can see now. I have found that major roads don’t move that much. They get bigger and add branches but the ghost of the old road is often still beneath the new, so I start there. For this build, I pull the Wigmore (1957) map Andrew Warland used on his site and then go to The Australian War Memorial [https://www.awm.gov.au] to get an original copy of the and 2/19th War Diary map. Then I make screen shots of the Google satellite views of the area in several scales. Then…I start layering them on top of each other and enlarging or reducing until all the keys match up. You know…map keys…those little graphs that maps have that tell you how many miles/kilometers per inch. The modern roads line up beautifully with the period maps drawn by the Australians. No, it’s not perfect…it was 70 years ago and the guy who drew the map back them probably did it on the back of a piece of typing paper by hand, so let’s call it an amazingly good period map. 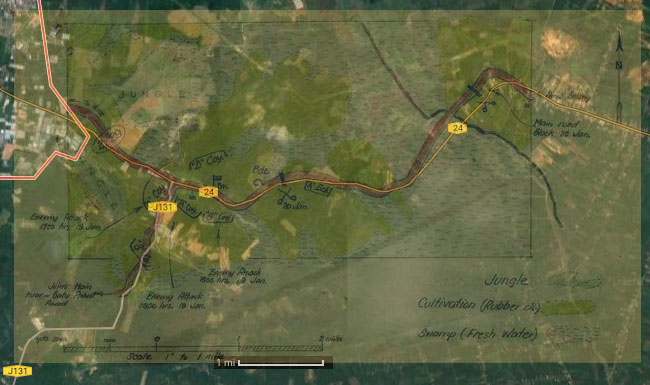 This lets me connect period materials with modern sources. YES! We’re in business. So, I know from Warland’s work that the engagement we’re interested in happened approximately 600 yards from the crossroads that we now believe is the junction of 24 and J131. So I measure that out. 600 yards = 1,800 ft. The Google map I use for this is 200ft per inch so 9 inches. I’ve added a big red dot for the ambush site and a white box to show the area a board might contain. The Japanese are on the left and lower center of the board area, and the Australians are on the right. 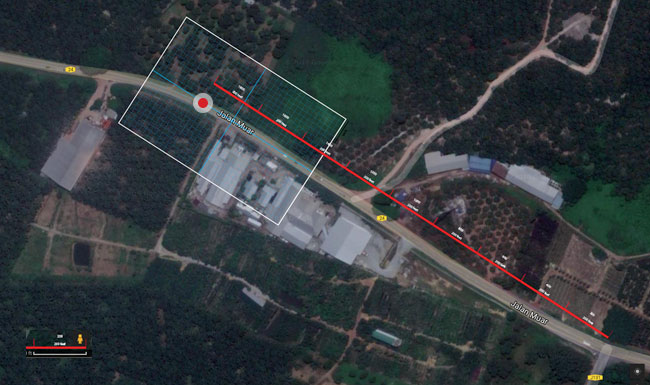 Both Ed and I hate this location for the roadblock. The Japanese line of sight would be all the way down the road, which at our game scale will be basically the whole board…not so much a game as a shooting gallery. I read the bright green area near the end of the 600 yards as low ground that would have been swamp at the time…so no movement through there and consequently a large section of the board unplayable. Again shooting gallery on the road. I go over the street view many, many times and can always see from this ambush position all the way to the crossroads. Ed hates this position and doesn’t believe it’s the place because there’s a better, more hidden place 600 feet further up the road. It’s around the yellow spot.

We argue…I mean, discuss. We both cite different bits of the period accounts to support our site candidates. But I think what might matter most here is the game and not the history. I agree that this second site is a more interesting game. Street view shows me that the lines of sight are still respectable but not infinite. I rotate the board a bit so the road isn’t running straight down the middle and we get something like this. 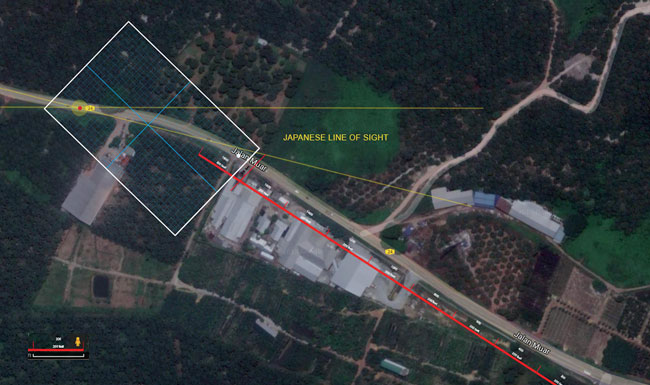 And this shows you the street views. Number 1 is from the Japanese ambush looking toward the crossroad but not all the way to the crossroad. Number 2 is from the Australian point of view just out of site of the ambush. You can use the big tree to orient yourself between the two views.

This gives us a specific piece of ground to translate into a board for our scenario. I think there is a still fair amount of interpretation ahead. Compromises will be made. But we’re definitely on our way.