I must admit that I’ve always liked the idea of Sharp Practice and the kind of game it covers, but version 1 never got me to actually play.

I bought the PDF and even its companion scenario pack, The Compleat Fondler, but I didn’t have a pre-existing stock of figures to draw on and the prospect of starting just seemed daunting. There didn’t seem to be an easy way to generate scenarios or to even know what the number and type of figures would be a good starting point. The newly released version 2 of the rules has changed all that and has me eagerly eyeing boxes of plastic 28mm figures to start down this road to madness.

So what is Sharp Practice? Simply put, it’s a large scale (40-60 figures per side at one man per figure) skirmish game covering the black powder era from 1700-1865. More generally, its a set of rules designed to game the kind of actions you read in the Flashman, Sharpe or Hornblower novels, complete with narrative descriptions of the major characters, so its heroic skirmish warfare with a good dollop of narrative role playing flavor. Troops operate in groups of 6-12 depending on their type, may form formations with like troops (usually) and are activated through the use of leaders.

The game feels like the love child of Sharp Practice V1 and Chain of Command, and a handsome child it is! The mechanics of firing, moving and melee seem to be mostly unchanged from V1 and will be familiar to anyone who has played other TFL games. When activated, units have two actions which may be used to move, fire, or reload, with movement being variable (i.e. move 1, 2 or 3 x D6 in inches). Fire produces shock and individual casualties, with shock slowly degrading capabilities until the unit starts to fall back, and eventually to break.

Activation is still via card draw to activate individual leaders with a variable turn end (i.e. not every leader may get activated in a given turn) as in V1, but all of the other characteristic cards have been subsumed into generic command cards for each side. There are usually 4 of these cards per side, and they may be used for several purposes. If you have them unspent at turn end, they allow you to activate one unactivated unit per card. They may be used in conjunction with a leader activation to increase the effectiveness of a leadership or of a unit firing or in melee. Two may be used to interrupt with a unit, 3 may be used to interrupt with a leader or launch an ambuscade, and 4 may be used to interrupt with a leader and units that have already been activated this turn. Further, there are numerous unit capabilities that may be activated by a varying number of command cards depending on the unit and its quality. The management of command cards and how to spend them is a large part of the decision making in the game since they all get reshuffled into the deck at turn end.

Blinds are gone as a deployment method, replaced with deployment points much like those in Chain of Command, although lacking the patrol phase from the game. Where this game is also different is in the distance one may deploy from a deployment point being dependent on both the type of troop (For example, artillery on top of the deployment point and scouting cavalry up to 18″ away), whether you are out of line of sight of the enemy (Out of LOS troops add 6″ to their deployment distance) and whether you are defending (Defenders add an additional 6″).

Force construction is also much more like Chain of Command, with a simple points system and some base forces to start from. Force lists for FIW, AWI, the Peninsular War, ACW and the Indian Mutiny are included in the book, with lists for both the Wars of Garibaldi and French Revolutionary forces (both France and Austria) already posted on the TFL website. In addition, a points calculator for rating up new units is available here. This system seems flexible, scalable and provides a starting point for those moving into a new period.

I’ve only managed one game so far, and while we screwed up some things, there’s a ton of nuanced decision making packed into a reasonably simple system. Its engaging, fun and captures the spirit of the literature that inspired the rules. Before Chain of Command came out I swore I’d never get sucked into 28mm gaming, and now here I am, drooling at the sight of Perry figures…

So how realistic is it? While the game is simple, it feels right in the effects of fire and morale. While the force composition does allow for heterogenous forces that probably wouldn’t operate together on such a small scale, it can be played with more homogeneous, and probably historical forces. However, the dynamic mix of forces is appropriate for this type of literature as is the characterization of the various leaders. I’ll give this one four starts as it accurately captures the genre, which may or may not strictly historical.

Playability is a strength of these rules. Even more than with Chain of Command, we were able to go without consulting charts very quickly in out test game. The variety in the lists and periods means that there is a ton of replay value here. Plus the command cards are are brilliant addition and it is going to take some time to figure out the optimum way to utilize them. Its a simple game with complex decision making. Playability gets five stars. 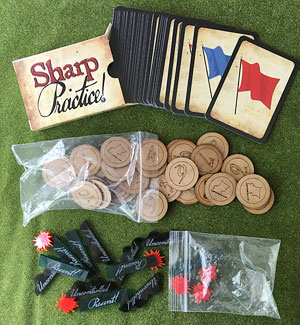 Ease of Entry is much better with V2 than with V1. The (explicit) extension of the rules to multiple periods, the inclusion of lists in the book along with free ones on the website, the lack of a specific range of figures or even figure scale and guidance through the army lists of where and how to start are all wonderful features. The TFL produced markers are useful, albeit not essential. You will also need either a card deck or poker chips as an activation deck. Although you can either make your own using either standard cards or poker chips with stickers, the TFL produced cards and chips are nice and worth the cost. I ordered the bundle with both, expecting to like the cards better, but I think in the end the chips are going to win out for me. Five stars even though it requires a card deck or chips (although you can make your own!).

Clarity is always one of those trade offs with rules, competing with how compact the author can make them. These are much like more recent TFL rules, clearly in the conversational (rather than legalistic) writing style with things being clear if you know what to call them and how to find them. These do seem better indexed than Chain of Command and some experience with those rules (or other TFL rules in general) will help you get around and understand things more quickly. There are numerous diagrams in the rules which do help! This set gets four stars for clarity.

So overall what do I think? I’m a huge fan of Chain of Command and I think this game may be just as good, or maybe even a bit better. I really like where this family of rules has gone and its gotten me looking at figures I would never have considered. HIGHLY recommended at five stars!