So, I’m back to blogging after a long hiatus.

Real life has been something of a rollercoaster over the past year, as we’ve purchased a house, done renovations, moved across state from Alexandria to Richmond, VA and I’ve managed to get promoted at work. These are all good things, but blogging and much of my gaming life has taken a back seat to more mundane things. Now, however, the dust is settling, the boxes are (mostly) unpacked and the game room is renovated enough to use. 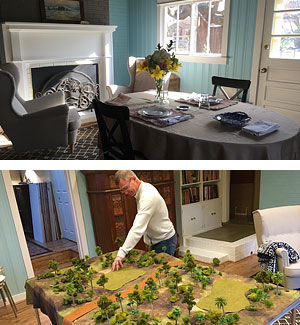 The game room was one of the reasons we bought this particular house, even though we knew it was going to be a work in progress. I wanted space for multiple 6’x4′ tables that I could form into either an 8’x6′, 12’x4′ or separate 6’x4′ gaming tables as the situation dictated. My wife wanted a multi-use space where we could play board games with friends, read by the fire or use as an entertaining space, all of which precluded permanently setup tables for miniature gaming. The compromise ended up being foldable 6’x4′ gaming tables from Urbanmatz, which could fit under the bed in the guest room when not in use but looked like they would be robust enough for regular gaming. As I recently got to pull them out and put them into use, I thought I’d give an initial review for those that might find themselves in a similar situation. 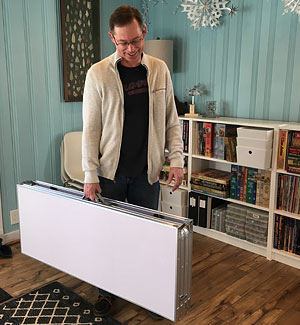 When we started researching this, there were two companies that made this sort of table, Urbanmatz and Gamingmat, both located in central Europe. Both versions were comparable in price 139.90 Euros (Urbanmatz) vs 149.00 Euro (Gamingmat.eu), including 21% VAT each. We ended up going with the Urbanmatz version as it looked a little bit more robust and had six legs instead of four since we were buying without really getting to see them in person. Total cost for two tables after VAT backout, including very fast (less than a week) shipping via FEDEX ended up being 344.24 Euro, about $390 (or $195 each) at the time I ordered. In the US, you can get 6’x2.5′ plastic banquet tables for roughly $50-75 each, or $100-$150 for each 6’x4′ table equivalent, so the cost of the Urbanmatz solution is roughly 1.5x higher than using plastic banquet tables. However, having used both, I can say the Urbanmatz table is much nicer and I am very happy with them! 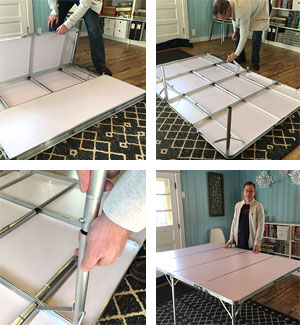 When folded up, the Urbanmatz tables measure 20″x48.5″x5.5″ and weigh 13 Kg (28.66 lbs) so are compact to store and easily transportable by one person. Setting up the table from its folded state takes less than 5 minutes. Once set up, the table feels less substantial than banquet tables but I didn’t feel like I had to be extra careful or that it was particularly fragile. After setting up terrain and starting to play I completetly forgot that I was playing on a folding table, which I think is the the test of a good gaming accessory! When playing on a pair of banquet tables I always seem to notice the transition point between the two tables, but there are no equivalent visual cues with these tables, which helps them fade into the background. After the game was over and the terrain was put away, folding up the table and putting it back in the guest room took even less time than putting them up. So, after an initial test I have no reservations about recommending these to others in a similar situation. I’ll see how they hold up over time, but at least right now I am extremely happy with them!

As far as what blogging holds going forward, I think being realistic about what sort of schedule I can keep while producing material that someone might actually want to read is the challenge. Unfortunately, quality content is the product of an unpredictable mix of hobby activity, inspiration and the free time to write about it, so I don’t want to overpromise. Rather than tie myself to an arbitrary goal, I’ll try to have things to write about then get them posted in a timely fashion. However, I do think a combination of book reviews, product reviews, scenario design and game AARs is the right mix. I think this is a balanced and achievable set of goals now that life has calmed down a bit, but like all plans we’ll see how it holds up once it’s contacted real life. Anyway, it feels good to be back involved and writing so far!