First you need an idea. As I’m the builder and not the player or gamemaster, the ideas start with Ed. Either from something he’s read or some tactical problem he’s mulling. In this case I think he was heavily influenced by Historicon’s theme this year: Jungle Warfare.

So he’s thinking Malaysia 1941-1942 for which I’ve already done a fair amount of visual research and produced a crop of jungle bits and pieces for his Malayasian campanign last year…you know the one he started blogging about and then completely and unashamedly abandoned. So I agree to the setting. First argument avoided.

The thing is, he wants a roadblock. I hate roadblocks. Roadblocks reduce a 4” x 6” board to one tiny spot of action. It takes away maneuver because everyone playing knows they’ll be fighting in one particular area, maybe on one spot. Ed draws me a sketch with a road literally down the middle and I call him a dirty name.

Yes, the road is a critical element and needs to be equally spaced between the players. Cause…you know, it’s a game and access to important stuff has to be balanced between sides but there’s the line of sight problem. We both hate very long lines of sight. One well placed machine gun and it’s game over man. Plus it’s a dead boring board. Just shoot me cause I ain’t building it. The argument begins.

So right away I’m imagining an S or U-shaped road through the board. We need terrain features that limit movement where the roadblock is going to be because there has to be a reason someone staged a roadblock there. Lets say jungle, and maybe swamp or rice paddy. Probably a combination because rice paddies open up lines of sight and we’re trying to manage those. But we also need “choices”. We need the ambusher to worry that maybe they’re not completely secure and the ambushed needs places to go OR they need a back way that might bring help. I imagine pathways that could carry reenforcements or a partner player relatively quickly through difficult terrain. I really like that this will open up more of the board for play and be interesting to look at. We’re both thinking jungle so lines of sight will be shorter even if I pack lots of paths, and that gives players an opportunity to maneuver under fire. Maybe we add a building where supporting troups could seek cover. Over a lunch we end up with napkin drawing No. 1. It’s a good place to start but I’d feel better if I could find a real place to base it on. I know Ed’s hasn’t really started his research and everything we’ve come up with could easily go out the window. This first conversation happens on March 8, 2019 but I need Ed to do his research, plus I’m crazy busy with life.

A month goes by, we talk again and make another sketch. See napkin No. 2. The rice paddies move to the side and enlarge but the jump off points haven’t moved so Ed has a pretty clear vision of how he sees this thing playing out. It would require more jungle pieces than I have made up but I had always planned to make more and have plenty of material on hand. 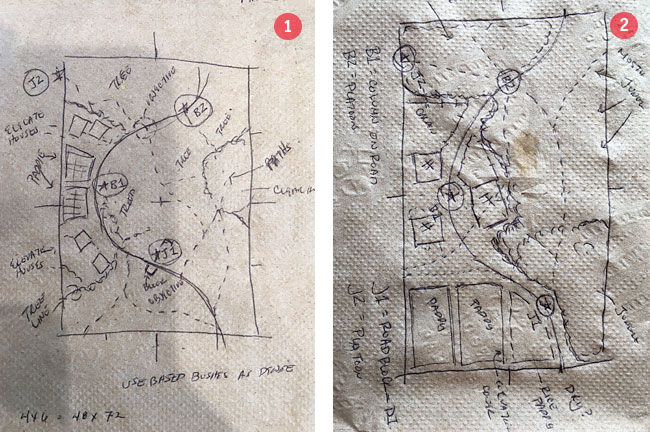 Then the first hint of a major redesign comes when Ed mentions that, he thinks, the areas he’s been reading about are mostly rubber plantation and not rice growing. I mean really the facts we pick up. Now I thought about making rubber trees last year but didn’t because they wouldn’t be used very often and we would need a metric ton of them. So I try to ignore this little comment for a while but the thing is, I ALWAYS prefer basing anything I’m building on real world reference. And it’s only a matter of time, a short time in fact, before I turn up a website that has everything we need to place this scenario in a real world event, place and time:

We don’t have a copy of Andrew Warland’s book “Robbie to Dorie” but it’s probably only a matter of time. Meanwhile the site he built in support of the book is gold because there is so little information available about The Battle of Bakri, Malaya and the Australians who died fighting it. Ed digs in and eventually settles on January 18, 1942, and an attack by the Japanese roughly 600 yards northwest of a crossroads, and yep, it’s a goddamn roadblock.

But the great news is that this road is now Jalan Muar 24 and the crossroads referenced is now J131. I can get street views on Google for all of it. So we have a real encounter in a place for which we can get satellite and road views. So a road block it is…next to a rubber plantation…Damn it.