This is the first of Jason Mark’s highly regarded Eastern Front histories from Leaping Horseman Books that I’ve gotten around to reading. 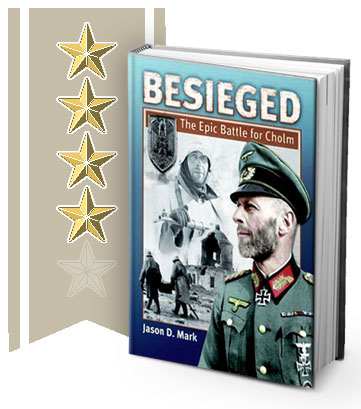 His other books are very Stalingrad focused, either focusing on a part of that battle (Island of Fire), histories of units that fought there (Death of the Leaping Horsemen, Into Oblivion, Croatian Legion), memoirs of participants (An Artilleryman in Stalingrad, An Infantryman in Stalingrad), or a photographic record of the battle (Angriff). This is a departure from that theme, and concerns the fight for survival of an encircled German Kampfgruppe during the Winter and Spring of 1942. While I liked it, the book’s strengths and weaknesses got me thinking quite a bit about both what’s important in a military history and what I want military history to do. First of all, the book is physically gorgeous and obviously well researched. Its printed on high quality paper with a durable color cover which makes it feel like its made to last. I must say that I like the trend away from dust jackets to printed covers, which I hope will continue. The book also contains numerous relevant photographs (nice) and maps (essential) that add to significantly to following the action. The bibliography is extensive and the text itself is well footnoted for those wanting to do further research. The narrative relates the battle from the Soviet breakthough that led to the encirclement in January 1942 until the relief of Cholm in May 1942 with a several page summary for each day. The level of detail on the German side is impressive and although the book is interspresed with anecdotal details from the Soviet side, it feels more like a regimental history of the Kampfgruppe than a complete account of the battle. I think thatís because some of the detail provided (the exact composition of daily supply drops and the names of selected German casualties even if they werenít mentioned elsewhere in the narrative, for example), while very accurate, does not materially contribute to an understanding of why the battle happened as it did.  The book’s major failing is that it provides this wealth of factual information without first constructing a larger context for the battle (i.e. Cholm’s relationship to the much larger nearby Demyansk pocket) or providing substantive analysis of why the battle played out as it did. For those that play war games, it felt like the military history equivalent of Advanced Squad Leader which perhaps makes some sense since the author collaborated with the designer of the Cholm ASL module while writing the book. Given all that, I’d give it 4 stars out of 5. It is an invaluable research resource given the extensive bibliography, copious footnotes and meticulous deconflicting of the primary sources. However, I had hoped it would be the definitive book on the subject and I think the analytical shortcomings prevent it from achieving that goal. The listing for the book on Amazon is here.