When selecting and collecting figures for 28mm skirmish games, you are generally faced with a choice between repeating figure poses, often many times, or mixing manufactures.

For black powder era games, I’m ok with repeating poses then adding in characters, but for 20th century skirmish games (and perversely, dark ages), I’d rather minimize the figure repetition and make every individual, well, individual. Alas, that means mixing figure manufacturers, which can sometimes be…. interesting. 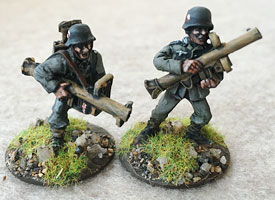 Warlord Games figure on the left mixes well with Black Tree on the right.

In this case, I was looking to do a 1941-1943 German Wehrmacht platoon in summer uniform with some Panzerschrecks to allow using them in 1944-45. Uniform-wise that means no camo smocks, some camo helmet covers, the occasional zeltbahn camo cape and a mix of jackboots and ankle boots. The first thing that strikes you when planning to raise an early war platoon is just how big they are compared to their late war cousins. A 1941 German Grenadier platoon has an officer with a pistol, 5 x NCO with SMG, 4 x two man MG34 teams, 28 riflemen and a three man 5cm mortar team for a grand total of 45 figures, compared to 33 for its 1944 equivalent. Allowing for an additional squad in support, acquiring some extra MG34 teams to make the platoon into Panzergrenadiers and getting the MMG, FO, Medic, Tank Hunters, and Engineer teams that are necessary for platoon level combat means the number of unique figures is going to get pretty high! In the end, I’m planning on:

That’s a minimum figure count 102 figures, before we get to AT & Infantry guns or vehicles! However, that should allow me to field 6  x 1941-45 squads in organized either 1 or 2 platoons, 1 platoon plus an extra squad of 1939 or 1940 infantry (yes, I’ll have to ignore the pants color!) or 4 squads of Panzergrenadiers, as well as a full set of support options. That’s a lot unique figures if I’m going to minimize duplicates!

Looking at the available manufacturers, Artizan Designs, while wonderful figures, are all in camo smocks, great coats or are Afrika Korps, so are out for this project. Of course, just my luck, Artizan just announced some 1942 German figures right after I planned this project! (See here)  I really like Perry Miniatures, but they are Afrika Korps only, so they are also out.  In the end, I settled on a mix of Warlord Games Blitzkreig Germans (both metal and plastic), Crusader Miniatures and Black Tree Design, with the possible addition of some figures from The Assault Group. 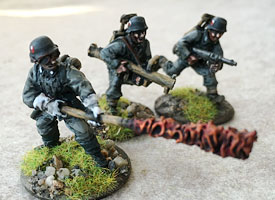 I just got the first wave of Germans back from my friend John Desch and am very happy how they turned out! This group is mostly Black Tree Design with some metal Warlord Blitzkreig Germans thrown in. The cause for this is two-fold: 1) I picked up some Warlord Blitzkreig Germans in a trade at Fall-In and 2) Black Tree Designs was holding one of their 50% sales. So far, so good as the metal Warlord and Black Tree Design figures seem to go well together.  Figures from Crusader Miniatures and plastics from the Warlord Games German Pioneer box are coming soon, so hopefully they will blend in just as well. 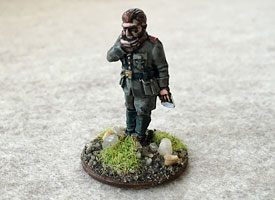 Plans for future expansion include:

Wave 2 will consist of the Warlord Pak 36, BTD Wehrmacht Infantry with Rifles VIII & Wehrmacht Officers, as well as 5cm Mortar teams, AT Rifle Teams and LMG Teams from Crusader, since all of those are already in hand or on the way.

Wave 4 will be guns (Pak 40 and leG 18) and assault rifles for morphing to a Volksgrenadier Sturm Platoon. I picked up some StG44 troops from Black Tree Design and will add some more from Artizan Designs and The Assault Group. The recent Warlord ones just look out of scale in the GW “Big Damn Weapon” tradition.

This wave is made up of the following figure packs:

I’ll do a follow up post with some more detail on the individual packs, but I’m very happy with the Black Tree Design sculpts. If you like metal better than plastic, I really think they give a great bang for the buck! 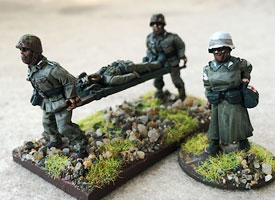 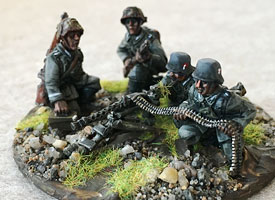